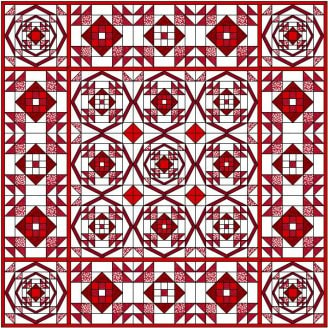 This design started with 2 blocks from the EQ Nine Patch Block Library – a classic Nine Patch was drawn in the center of the Summer Winds block and then varying fabrics were used in the center nine patch to produce 2 colorways . The blocks were set in the 9″ border and then also merged with an altered version of the EQ Wobby Frame and set around the perimeter of the quilt center and rotated to form a secondary pattern around the center block.
The center block in the quilt and the border corner blocks were created by double merging the frame with the Summer Winds block.