30% off the new Encyclopedia by Barbara Brackman! 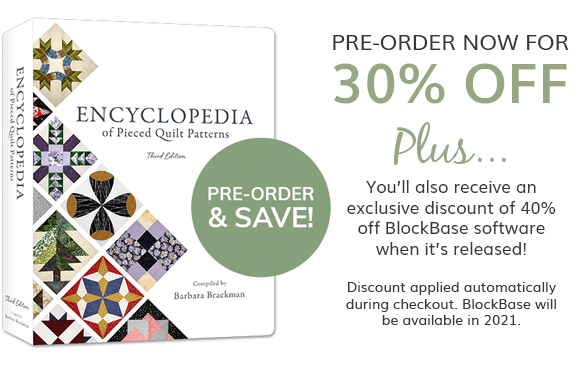 PRE-ORDER DETAILS
Save 30% on the Encyclopedia of Pieced Quilt Patterns book by pre-ordering!
Expected ship date: December 1, 2020. Your credit card will be charged at time of purchase. Pre-order also includes a 40% discount on BlockBase! Pre-order offer ends November 24, 2020 at midnight, ET. Discounts are applied automatically, no promo code needed. Cannot be combined with any other offers.

Visit our other sites:
Next February 2013 Quilt: Geese and Cherries

Sampler for Summer By Barb Vlack 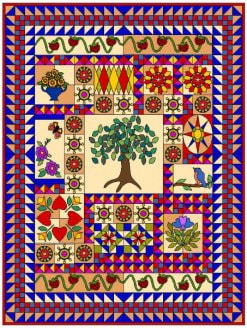 Designed for clubEQ challenge for February, 2013: Setting for Multi-Sized blocks!

I used a Horizontal layout with 2″ blocks as a grid base. Blocks were set on Layer 2. Filler blocks were placed on Layer 1. Tile Squares borders were added around the center. With the quilt worktable options, I set the snap to grid for the block setting to 2 inches to ease the positioning of the blocks, which were sized to be even numbers. I had to remember which layer I was working on as I colored! The horizontal layout offers a grid as a guide as well as an easy way to add pieced blocks as sashing and fillers on Layer 1 with design blocks set on Layer 2.

Once the quilt layout is set up, it can be used over and over with different block combinations. I recommend saving it in My Layout Library for easy access in other projects.

Next Quilt: Geese and Cherries