Peeking in the Window By Sharon Archer Ridgefield 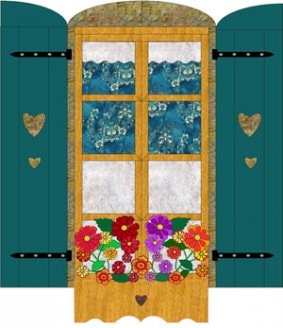 I was working on plans for a mixed media series based on a long time passion of mine – windows when this challenge came along. Rather than abandon my current project I decided to combine it with EQ.

The center of the piece is a 2×4 block Horizontal Layout into which the window pane blocks of curtains and/or wallpaper were set. The 1st border contains the outer window frame with subsequent side borders containing the brick surround & slats of the shutters. Motif blocks for the top of the shutters, the brick casement above the window and the flowerbox were designed in Patchdraw and set in the virtual border on layer 2.

The flowerbox was then filled with appliqué & embroidered flowers; the Heart shaped cutouts exposing the brick wall behind the shutters and the shutter hinges were all placed on Layer 2.

Previous Quilt: Teddy Cloud
Next Quilt: Come On In