A Busy Day in Lafontaine By Dorothy Atkinson 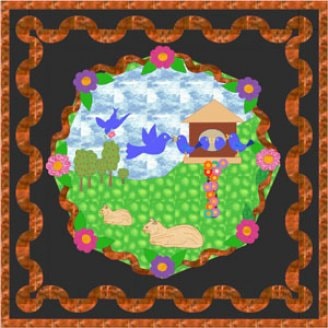 This scene is what I saw when looking out of the living room window.
The mother and father bird were kept so busy. My cats were just not interested and turned their backs on all of the noise. I kept my eye on them just in case but they have never been interested in the birds.
I used both layer 1 and layer 2. of the Custom Quilt.
I experimented using the tools on the Applique Block. Having just finished Angie Padilla’s book EQ6 Applique Drawing (it works just fine with EQ7) I was anxious to try out what I had learned from her book.
The birdhouse was very easy to draw. I used shapes from the Polygon Tool,
The vine was drawn using the Brush Stroke tool. I scanned the picture of the one cat, traced it, cloned and resized the second cat.
The cats are like my two ginger cats Kelly and Casey.
The flowers were drawn using the Ellipse tool. That wasn’t really necessary because there are similar blocks in the EQ7 Library, but I just wanted to try it out. The birds are from EQ7 Blocks. The baby birds were also from EQ7 Blocks. I chose them because they had that babish look so I just removed them from another EQ block. Mother and father bird were also EQ7 blocks which I made into motifs.The cats too are motifs I put all of the motifs on the second layer. The wee birds inside the birdhouse are just the heads of the baby birds.
It was a fun scene to do because it so many things that I love. I couldn’t get my dog in because it is rather busy as is.
Oh well, she will make another Challenge