Somewhere Out There By Judy Morin 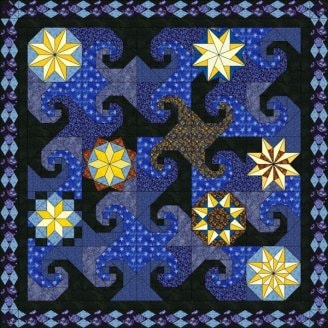 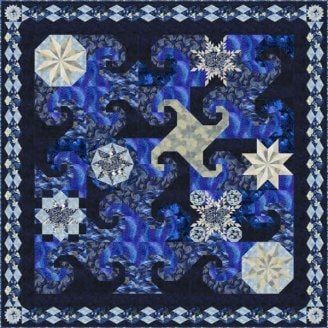 I recently made two copies of the same quilt “Somewhere Out There” for two grandsons. The original Quilt was started in the Cotton Spice e-zine, but never finished. I was intrigued with the Monkey Wrench background and, after discovering that the quilt was not going to be finished, I played with EQ and discovered (to my delight) that all the parts were in EQ – including the pieced border and the teeny corner blocks.

When I decided to actually make my version of the quilt, I chose to use various stars that could be hand pieced with Inklingo rather than the stars that were in the original quilt.  The designer also had a very “strange” way to piece the Monkey Wrench blocks as well as a difficult method of placing the correct fabrics in the proper places. I found that only five different blocks needed to be pieced (other than the ones with the gold and blue fabric in them – and they were all the same anyway!). Also, I found a great fabric to use for the borders, rather than piecing them – the quilts were for eight year old boys, after all!

One of the quilts was entered in the local State Fair where it won a Blue Ribbon in it’s category. I couldn’t wait for the local quilt show a month later as I wanted to give the quilt to the grandson as soon as I could.