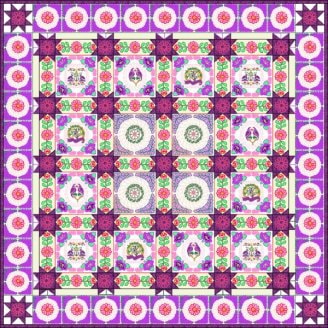 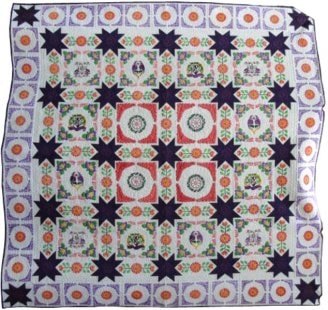 The sixteen blocks are machined embroidered. I used EQ6 to create the embroidery design. I then exported the design and digitized it with Bernina’s Designer Plus software. I then imported a PNG file of the design in Designer Plus to bring back into EQ6 has a photo to place into the blocks.

The designs around the perimeter of the blocks are from EQ6 quilting designs that I redrew as motifs so I could color them. I used trapunto on all the motifs in the blocks. The sashing squares and corners and the center flowers in the border blocks were machined embroidered using fleece that I then cut away to create the trapunto effect.

Finally, I longarm quilted the entire quilt, and handpainted the quilt using fabric pens. I called it Early Morning Madness because I worked on it usually between 5:00 AM and 6:00 AM in the mornings before work!