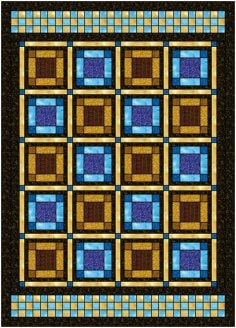 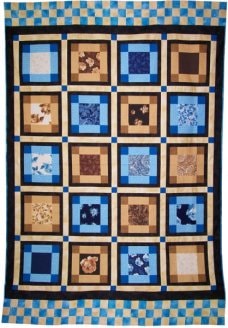 It’s working name is Box 3. That’s because it is the third quilt UFO I have worked on this winter. What was in the box when I brought it out into the open was (24) 6″ squares from Classis Cottons plus two blues and two browns to make the blocks out of.

Knowing that I wanted a large nap/twin bed quilt I really enjoyed having my EQ7 to play with to see what I could come up with. First it was making the blocks and seeing if I wanted to sash or frame them, I decided to do both, then it was working with the borders. I wanted the quilt longer but not wider so I played with a number of possibilities until I came up with what I wanted.

Then, when it was time to cut the sashing pieces and the borders, I went back into my EQ7 to double check the size of the pieces/strips I was to cut. In other words, my EQ7 was my brains and my memory.