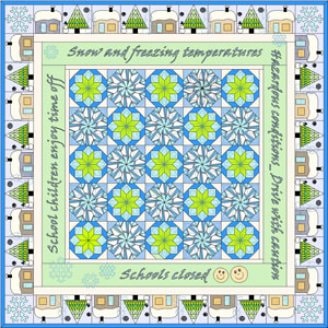 Last December and January we had weeks of snow. It’s unusual in Ireland to have so days and weeks like that. People were trying to travel home for Christmas and it wasn’t easy with the roads being as bad as they were. Families had arranged to fly to Europe and North America to visit their loved ones during the holidays and were disappointed due to the cancellations of flights with the hazardous weather conditions. The December snow passed and again in January there was more of the same snow and freezing temperatures. The snow as it covered our usual grassy ground reminded me of the Canadian winters I grew up with and where by the time April arrived you couldn’t help but feel sense anticipation for the approaching days of summer. You realized winter had past when you began to see the tightly packed hills and mounds of snow were beginning to disappear with the warmer sun now overhead.
Blocks: Windmill > 01 Classic Pieced
Winter Wonderland 2 > Kaleidoscope Collection > by Andrea Bishop
All blocks and stencils from Library. I drew the ‘happy’ faces with the kids being delighted with their schools being closed during the worst of the snow.