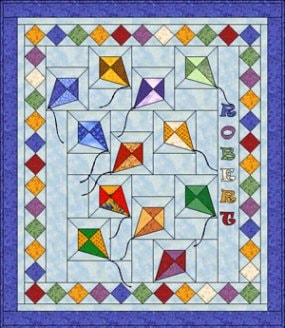 I started playing with this design in EQ5 a few years ago. With a grandson on the way in 2009, I resurrected it in EQ6, played with the ‘Text’ tool, but didn’t put the final polish to the file until now. The quilt was designed for Robert Turgeon, born October 2, 2009. The idea is from Tracey Brookshire but is sized to be either a cuddle quilt or a wall hanging. The real quilt has been presented to Robert. Thank you to Gordon Cooper for pointing out what a nice font Ravie is for applique.