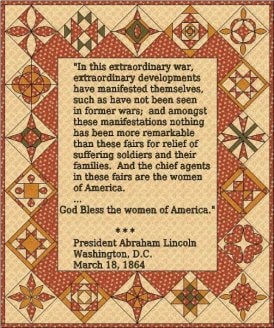 President Abraham Lincoln made these remarks at the closing of the U.S. Sanitary Commission Fair in Washington, D.C. in 1864.

There were many societies of women who worked tirelessly sewing and doing other things in the Civil War era.  They put on fairs that raised a lot of money.

I surrounded Lincoln’s quotes with Dear Jane blocks from her quilt made during the Civil War.

Previous Quilt: Dorothea’s Doves
Next Quilt: Thinking of You