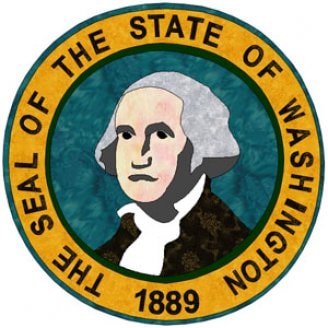 My odd habit is browsing an on-line encyclopedia with my pre-breakfast coffee. I was learning about my own state the day the circle challenge was issued.

Washington has mountain ranges in the center, the northwest and the far southeast. It also has a deep rain forest in the west. My family has lived in all parts of the state but the area we live in now is described as “an eastern semi-arid desert given over to intensive agriculture.” The state has led the country in apple production since the 1920s.

This is the first and only state in the country to elect women to both Senate seats and the office of Governor. This is good and would have been better had they been of a different political party.

Previous Quilt: Sammy Circle sets off for adventure
Next Quilt: Easing In