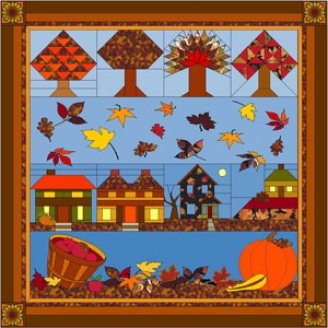 EQ Block Library pieced tree and house blocks used in strips 1 and 3 were modified slightly to fit the design. Most leaves – both falling and fallen in the other strips came from the EQ Block Library – Motifs.

I also created two blocks for the project – the Pumpkin & Gourd block was drawn in Patch Draw using basic shapes and to draw the Basket of Apples block I first imported a photo I had recently taken to use as a tracing image.

Several designs from the EQ Embroidery Library were placed on Layer 3 – pumpkins & apples amid the houses to echo the appliqué motifs in the bottom strip, a few leaves among the appliquéd ones for added variety and, sunflowers in corner blocks of the border.