Are we thinking Christmas? By Daphne Stewart 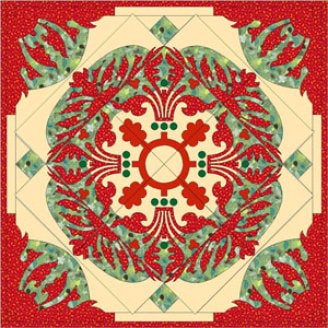 This was not the quilt I set out to design. I used these blocks in a straight set quilt that looked OK. But what would happen if I popped these blocks in a medallion layout? And what would happen if I deleted some of the blocks from the layout and resized the ones that were left? And why don’t we import a triangle block from another layout for the empty corners? So that’s what we did.

The base is the On Point Medallions – 21 layout, stole a block from the Block Turned Quilt – 3 (Old Maid’s Puzzle) layout. The blocks used — Fleur de Lis and Alhambra Tile — are from EQ’s library with a little tweaking to give them a two-color background.

The challenge fabrics used are ‘Birchtree Lane’ by Jenni Calo and ‘Animal Party Too!’ by Amy Schimler.