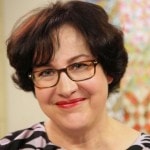 Anita Grossman Solomon was first introduced to The Electric Quilt while watching the Great American Quilt Show. Penny was featuring EQ1, which Anita thought would solve her problems. Anita watched the show’s credits and called Penny, at home, to ask about the program. Previously, Anita had been making “quilting disasters” by  getting an idea and sewing without a plan. She is happy that EQ does the math for her and says that, “EQ is why I can do what I do.”

When Anita began learning EQ she would pick a quilt out a magazine and attempt to reproduce it in EQ. (That’s a great idea and we sometimes have new hires at the office do it, too.) Anita said, “When, as a beginning quilter, I wanted to set blocks on point, I had absolutely no idea what size triangles to cut for the border. I scoured books and magazines for cutting information. I searched for layouts of On-Point quilts made of the same size blocks as mine to guide me. Quite the crazy workaround. I’m no longer a beginning quilter but I turn to EQ to calculate the size of everything that goes into my designs. EQ allows me to visualize my quilts. Without it I’d be constructing my blocks and quilts by trial and error.  In a few clicks I resize my blocks, rotary cutting calculations and quilts.” 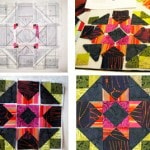 (We don’t have a one going on right now but the previous Sew Alongs are still fun and helpful!)

She has been featured in many magazines. Anita, along with her Pineapple quilt, are featured in our ads in Quiltmaker and Love of Quilting May/June issues, Quilter’s Newsletter in June/July and McCalls in July/August! She says she adores  two color quilts. “They  make great wedding presents or graduation gifts. For younger people a two-color quilt in their college colors makes a wonderful gift. And two color quilts are so timeless.” 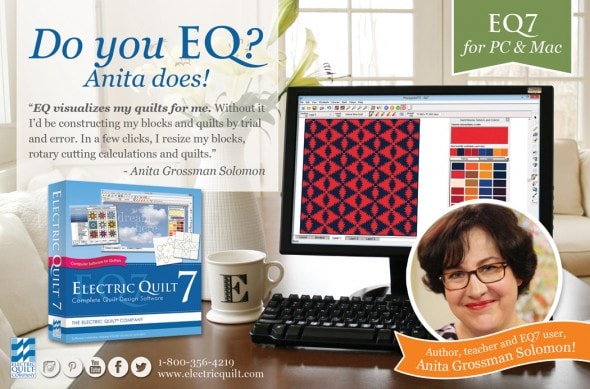 Her original Pineapple quilt was made in Tomato Red and Cream. When Robert Kaufman asked her to make a 30th Anniversary quilt for them she used the Kona solids Coral and Indigo. The Kona colors are beautiful and available in Stash 2014 Download 04.

She teaches her half-drop set Pineapple in her Craftsy class. She says the quilt would never have come into being without EQ’s layout features.

Anita has also written 3 books. She used EQ to develop all the designs. 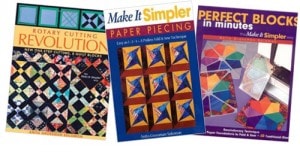 The cover quilt for her latest book, Rotary Cutting Revolution,  of Old Italian Blocks, was problematic. She had made 110 blocks, some with  light backgrounds and the others dark. She used EQ to reconcile the blocks into a windowpane setting.

She says, “You don’t have to be a master to do what you need to do.”

Anita wants to “Make It Simpler” and her innovations make quiltmaking faster and easier. Her original techniques, efficient construction shortcuts and no-waste methods have been featured in many magazine and books. Now she’s teaching her techniques in her Craftsy class, Traditional Blocks Made Simple, which  comes with a free e-book of Rotary Cutting Revolution. She has also begun writing  a bi-weekly column on Craftsy.

She  teaches internationally which included a recent  cruise through the Panama Canal! Upcoming is a New England/Canada Fall Foliage cruise. You can see more information on her workshops here.