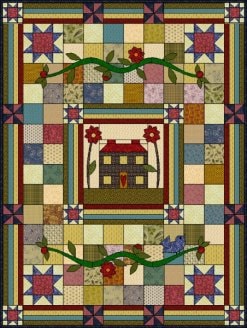 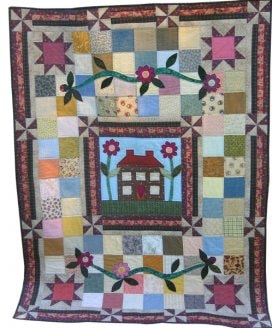 This is a quilt I have made for my niece’s 21st Birthday. The central block was drawn by me, and the floral swag is composed of a combination of an EQ block (the bird on the bough) and sections I drew myself or adapted from other EQ blocks.  Other blocks are from the EQ library.  I put the design together having seen a quilt with a central block surrounded by rail fence blocks and corner stars.  I was also influenced by the fact that I had a lot of “charm packs” waiting to be used up and wanted a design that would be relatively easy to put together.  I quilted this on my domestic sewing machine, using a combination of “stitch in the ditch” for the rail fence and star blocks, and outline quilting for the appliqué and charm pack squares.