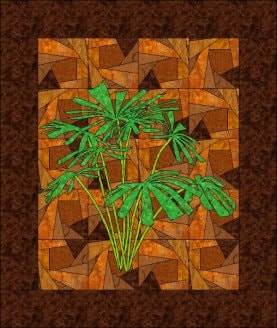 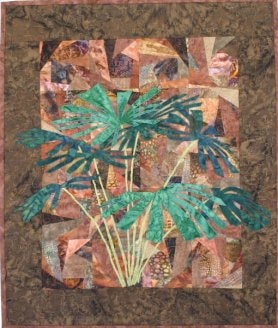 I recently saw the quilt gallery on the Electric Quilt web site and wondered if you would be interested in including this wall hanging that I have recently made. I use EQ6 to design almost all my quilts and I love the improvements in this latest version. Until I discovered Electric Quilt I just used to make traditional quilts and follow patterns because I just didn’t have the confidence in my own drawing and designing ability, but getting a computer and then discovering Electric Quilt was the best thing that ever happened to my quilting.

I live in Brunei, which is on the island of Borneo in South east Asia and we are lucky enough to still have some areas of tropical rain forest here. This wall hanging was inspired by a photo I took in a near by national park. I created the background using crazy foundation pieced blocks and then imported a picture of the fan palms which I then drew as a separate motif. I used a wide variety of mostly batik fabrics to piece the foundation blocks and replicate the colours of fallen leaves. The stems of the palms were couched yarn and then I used several different green batiks and satin stitch applique for the fronds.

I have written about how I made this design on my blog Anne’s Creative Threads and I have also written about some of the other designs, mostly nature inspired, I have made using EQ6.
Regards,
Anne Maundrell, Brunei