I heard him before I saw him. “Man, that last subway stop took forever to get to,” I heard Raoul tell Ruthie by way of a greeting.

“That’s because you’re going under the river, my friend,” I poked my head out the door. “Welcome to Brooklyn!”

“Hey, boss!” he outstretched his arms for a hug (you gotta love a kid who calls you “boss,” you know?) “How’s the new digs working out?”

“Great — we haven’t even been open for a week, and we’ve already got a case on our hands.”

“And it’s a quilt case!” Ruthie blurted out.

“No!! Are you for real?” His eyes got all wide. It’s fun to tell him something shocking, because he always responds like it’s the most exciting thing he’s ever heard.

“Yep — but enough about us. How was Puerto Rico?”

After filling us in on his extended trip, during which he briefly entertained thoughts of moving there permanently — can you blame the kid? — and showing him his new office, which he gave appropriate oohs and aahs over, we got down to business as they say.

I showed him the picture of the sewing circle and told him about the mysterious “sburg” scrawled on the back of the block. Luckily, the picture had the women’s names written on the back, and I’d already chosen my first subject: Ruth Gonzalez, first pictured on the left.

Should sound easy enough, but in this neighborhood Gonzalez is like Smith, if you know what I mean (i.e., there are a lot of them around). Luckily, with Raoul back on the job I felt confident he’d be able to sniff out the situation. And since there was a Gonzalez bodega on the corner of Bedford and S. 4th, that was the logical place to start.

Now, usually bodegas won’t get you very far in the information category, but remember this is Brooklyn we’re talking about. Bodegas aren’t just stores where you can buy your milk, cheese and beer, not in this neighborhood anyway.

Here, the bodega doubles as a social Mecca, a place to hang out and drink beer, play pool in the back room or play dominoes in front of the store. Come here on a Friday or Saturday night and you’ll find yourself in the middle of a party. So I had no doubt that Raoul would be able to enter himself into the conversation at hand.

Of course, they’d be able to tell he’s not from the neighborhood but at least he’d be able to strike up a conversation — he’s a natural at that (hey, I didn’t recently promote him to assistant detective for nothing, you know).

Now, I admit this job wasn’t as simple as other quilt cases I’ve had — but then again, this was only my second quilt case, so what did I know? But unlike my other fiber-filled case, in which I had to match 11 board members with a particular quilt block (only to find out that all the aforementioned members had a hand in stealing the quilt, but that’s another story…), whereas this case wasn’t so clear-cut.

Somehow I was supposed to find out what the rest of the blocks were, if indeed there were any more blocks at all. But I had a hunch (and when you’re a detective, you tend to go with hunches) that there was more to this quilt than the block that my new client, Juanita Gomez, had so trustingly put in my care.

For one thing, if there’s anything I know about quilts (and I don’t know much, but I’m learning), it’s that blocks typically subscribe to the “strength in numbers” philosophy. That is, where there’s a block, there’s a quilt. At least, that’s what I had to believe if I was going to take on the case. But the mysterious letters on the block also gave me reason to suspect other blocks were among us.

So it was with my faith that such a quilt exists that we descended upon Gonzalez bodega. Or, to be more accurate, Raoul descended upon it (I didn’t think they’d be as forthcoming with a white girl from the Midwest in their midst). Raoul was to pretend that he was new to the neighborhood and strike up a conversation, maybe getting invited to a game of dominoes or pool, somehow working Ruth’s name into it. It wasn’t going to be easy, but then again, Raoul is a pro at the talking game.

For my part, I was to go home (I live just two blocks from the bodega, and it was after hours because the party doesn’t start until quitting time) and Raoul would meet me at my apartment to report on his progress.

Of course, that was the original plan. After I got home, though, I felt a little restless — I like to be a part of things, or at least be connected so I can hear what’s going on. This not knowing business just doesn’t suit me.

The girl can’t help it…

Besides, what if Raoul needed back-up? So that’s how I ended up sauntering into the bodega myself, perusing the juice aisle. I knew Raoul wouldn’t be happy with my interference, but I wasn’t technically doing anything wrong or spoiling anything, I just was there for moral support.

I didn’t see him when I first entered the store, so I stole a glance in the back room. There I saw four guys playing pool and drinking Heineken, their Spanish staccato going way faster than my Spanish language tapes do (I’m trying to learn, but I’m still at the “where is the bathroom?” stage).

Even though I couldn’t understand them, I was pleased to note that one of the guys was Raoul! How does he do it, I thought to myself. Is speaking Spanish fluently an instant membership to the club? I’ll bet he’s really using the fact that he just spent two months in Puerto Rico to his full advantage — in a neighborhood where every day feels like Puerto Rican Pride Day, I’m sure they’d eat that right up.

Luckily, he didn’t see me as I passed the back room and made my way towards the cat food section. No bodega’s cat food section is complete without a cat, and sure enough there was one rubbing up against my legs as soon as I passed the first Meow Mix box. How do cats know that it’s their section, I wonder? This cat was my fave among the bodega kitties, because it was a tuxedo cat (white with black spots), which are the cutest cats in the world — next to brown tabbies, of course. Not that I own a cat or anything — I can barely keep a cactus alive! But I do like to admire them.

Clue in the border

Maybe when I’m an old lady I’ll get a couple lap cats, I thought as I bent down to scratch its little white chin. As I did so, I noticed its little bed that was on the bottom shelf, next to the Nine Lives cans. I also noticed that the bed was covered with a quilt — or, which I discovered when I pulled the quilt up, that it was just a block.

It was so faint I almost didn’t see it — on the back edge, I barely could see what looked like part of an “m.” The border looked significantly older than the block (hey, I’m no quilt expert, but I can at least tell a new block from an old one, okay?).

I had no doubt that this was the right Gonzalez bodega. See what I said about the neighborhood being tight? – or that the border was connected to Ruth and the Williamsburg Sewing Circle. But what did it mean? Why did they each have a block — or did they? Is Ruth still alive? And what is written on the back of this quilt, anyway?

I didn’t have much time to ponder this, though, because just then a customer started down the aisle towards me. Luckily, he was too busy deciding between Corona and Bud (tough decision) to notice that the fellow customer looked like she was a quilt snatcher. I quickly put the block back in its fuzzy little bed, and got out of there (not without buying a Citra drink myself — I don’t know where that stuff comes from, but I’ve only been able to find it in this neighborhood and darn it all if it isn’t the most refreshing lemonade I’ve ever tasted).

Once on the street and out of sight of the local boys who like to hang out on the street corner, I opened my notebook which I carry for just such occasions and scribbled down my version of what the border looked like. I’m not much of a drawer, but at least it would help me remember what it looked like.

I knew Raoul was not going to be pleased that I had interfered with his detective skills, but hey, I’d found out the block, right? How could he be mad, really? I mean, we’re a team here, right?

“How could you come into the bodega?” he asked when he finally made it back to my apartment to report on his new friends (and that one of them was Ruth’s grandson, and that Ruth had passed on two years ago). “What if I’d seen you and blown my cover?”

“Hey, you didn’t see me, did you?” I asked. “Besides, if I didn’t go in there, I wouldn’t have been able to find this,” I took out my notebook with a flourish, displaying my sorry excuse for a quilt border.

Raoul squinted and cocked his head. “What’s that?”

“A quilt border, what do you think it is?” I snapped it closed with disgust. So my drawing skills aren’t up to par, does he have to get nasty about it?

“And, my friend, on one edge I could make out the letter ‘m’.” I nodded at him meaningfully, hoping for a “well done” or some such reaction to my superior sleuthing skills.

“So what does that mean?”

“I have no idea,” I was forced to admit. “But all I can tell you is there’s more to this Williamsburg Sewing Circle than meets the eye. And it might not be pretty.”

“All I can tell you is that you’d better not trespass on my assignment the next time,” was his quick response. “I had it all figured out how I was going to ask him questions next time I came around.”

I was tempted to point out that I was saving him a lot of trouble by finding the border first, but the kid looked so dejected I held my tongue. He’s a good kid, after all (and sometimes will still let me call him that).

“Listen, kid, let me buy you a slice at Vinnie’s. But we’d better go down Berry instead of Bedford, I don’t want your new friends to see us together.”

So off we went into the Brooklyn night — not sure at all where our case was going, or why the sewing circle seemed content to cut up a quilt after sewing it together. For now, our hearts were set on Vinnie’s. 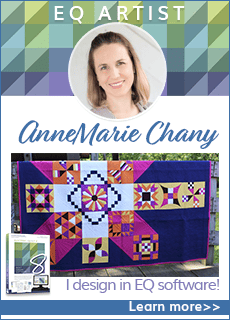