Skylights Episode 02: Table for One

Mystery lovers, read on! Our mystery unfolds all during the year in a continuing series posted monthly here on our Home Page…

Last month we introduced our mystery. You met our narrator, young Brooklyn-based “Quilt Detective,” Mitzi McDruben, along with her faithful receptionist Ruthie, and able assistant, Raoul.

Mitzi took on her first quilt case: The Mystery of the Missing Quilt. Her mission? To find a missing quilt. Her time frame? Exactly eleven days. Her problem? No one knows what the missing quilt looks like!

Read a new mystery episode each month as Mitzi interviews another Board Member, in her search for clues leading to the missing quilt.

Following each episode, take the Secret Passage to receive your instructions for making or finding eleven different quilt blocks in EQ5 or EQ6.

During the final episode, Mitzi solves the mystery, and YOU discover how to put your blocks together in EQ5 or EQ6 to form a secret “Sky Lights” mystery quilt.

Our mystery series was written by Megan McMorris, a Free-lance author from Portland, Oregon.

And now, grab your gumshoes. Tilt back your chair. But keep one eye on the door as you get ready to solve…The Mystery of the Missing Quilt!

Episode Two: Table for One

Bingo! thinks Mitzi. He’s bound to lead Raoul and me straight to the clue.

Party of one, ma’am?” The elderly restaurant host bows slightly.

I grin through my grimace at the reference to myself as “ma’am.” (At the age of 35, I hardly think I qualify as a full-time “ma’am” status.) “Yes, for one,” I answer. I’m mustering up my Midwestern sweetness. (Hailing from Illinois can really help in such matters, especially now that I’m in New York City. I don’t often add that I actually grew up in the city limits of Chicago. Let ‘em envision cows and farms, is my philosophy. The more innocent they think you are, the better.)

I tug on the maitre ‘d’s arm as he leads me to my “Table For One.” “Do you think you could seat me in that man’s section?” I shyly inquire, pointing discretely in the direction of the waiter who resembles the photo I’m carrying of Garret Green (the first of the eleven Trade Winds Museum Board Members I’d set out to interview).

“Perfect,” I sit down, nodding. He hands me a menu.

“Mr. Green will be right with you. Good luck,” he winks as he rushes off to greet the next customer.

I case the territory, reaching in my bag for my book (trashy novels never fail to throw otherwise suspicious people off the course). Once my face is buried in page 22, I whisper into my walky- talkie (which doubles as a watch) to Raoul. “I’ve entered the premises, do you read?”

“Loud and clear, Mitzi. Say, how is the place, anyway? I’ve always wanted to take my fiance to the Top of the Sixes.”

I don’t have time to answer. I hear a deep voice saying, “Love on the Nile, hmmm?” I look up to see my waiter, Garret Green, winking down at me.

“Yes, these trashy books do the trick for getting my mind off my work,” I smile as I shut off my watch. Raoul would get the hint.

“May I ask what you do? Or would you like a drink instead?” Green asks, cocking his head to one side, grinning. I could see why the host had automatically assumed I was interested.

“This Green fellow was certainly a charmer…” Mitzi thinks

“Maggie, it is. One Heineken coming up while you peruse the menu and enjoy the view,” he says. He sweeps his arm toward the wide city expanse as his gaze lingers at the view. “I shall return.”

As he makes his way toward the bar, I sit my handy black bag on my lap, digging for my notebook and pen.

My notes will come in handy in case Raoul doesn’t pick up enough clues from me to match Green with a specific quilt block right away. Raoul is hardly a quilter, although he has been at the library for the past day researching the ins and outs of every quilt block he can find. Just the same, I start scribbling. “Waiter, charmer, dreamer, hopeless romantic type–yet something slightly seedy about him, as if he’s doing it only to impress you–probably lives in a big bachelor pad and second-guesses every decoration based on whether it would impress a woman. Is probably close to his mom, who quite possibly still washes his laundry.” Hey, when you’re in the business of observing people you learn to pick up on small clues. Once I even solved a case by noticing that my suspect had a twitch in his left eye. Long story.

Mr. Charmer returns just as I snap my notebook shut. “A writer, did you say you were?” he gazes at my notebook.

I blanked. It doesn’t happen often, but then again, why would I suspect that this unsuspecting chap would actually ask me twice what I do for a living? Unless . . . was he on to me already?

“Oh, no, not a writer. Although I’d like to be one someday. For now, I choose to work among books–I’m hoping the natural writing ability will rub off on me.” Whew, that was close! I’d have to keep an eye on this Mr. Green. He may be smarter than he appears.

“Oh, yes, a librarian,” says Green, as he props himself on his arm and gazes out the window. “Often, when I’m gazing out the window in my apartment,” he says, adding, “I have a penthouse, you see . . .” (Yes! I thought to myself. Some things you just can’t hide from a detective.”)

“. . . I often get some great ideas that way,” he continues. “I call them the windows to my creativity,” he gestures, as though he’s outlining the title of a movie. (Uh, okay…) “But my creativity isn’t about words on paper. My creativity is,” he looks around as if he’s about to divulge a secret, “in QUILTS! Not that I MAKE the beauties, you understand,” he continues as he looks at his hands, laughing. “I’m kind of a klutz when it comes to such things.”

Bingo! So his mother probably does do his laundry after all. This subject was unraveling quite nicely before my eyes–I had to refrain from opening wringing my hands maniacally (a habit I have when I feel close to a solution.) “Just let him continue, Mitzi,” I say to myself. “He’s bound to lead Raoul and me straight to the clue.”

And he does continue. “No, I hire people to make quilts instead. In effect, I create them without actually sewing a thread. This way, the quilts end up exactly as I envision them, instead of just being someone else’s creation. I’ve built up an extensive collection over the years.”

“I’ll bet you’ve built a collection, Mr. Green,” I think… silently asking “Do tell–does your collection include THE MYSTERY QUILT?!!”

Aloud, I say, “How fascinating!”

He warms to the subject. “You know how some people’s creativity is sparked by sitting in a certain chair or room? For me, it’s all about WINDOWS.

You should see the giant ones in my penthouse. The only problem I have is with the cleaning people I’ve had over the years. I’ve tried to get them to include the windows in the deal, but you know what they tell me?”

“Yes,” he looks at me as if he’s trying to figure me out. Obviously, he’s not accustomed to women who actually have something to say. “They say, ‘I don’t do windows.’ So I do them myself,” he explains, adding, “But I’m sorry, where are my manners? I’ve just enjoyed talking to you so much, and you see this is the end of my shift so you’re my only table and the host insisted I take just one more. Would you like to order?”

I quickly order the fruit plate special to get him out of earshot.

I had heard the fruit plate was very special at the Top of the Sixes Restaurant!

“Raoul, can you read me?” I whisper into my watch. “I’ve been chatting with our suspect, and he’s quite the chatter-upper.”

“You heartbreaker,” Raoul quips across the static.

“Yeh, yeh, save it Raoul! I’ve got some good info and I need you to cross-reference any clue against quilt blocks,” I whisper.

“Whattdya think I’ve been DOIN’ lately, chatting up the librarians?” he whispers back.

“I wouldn’t be surprised. Now get this down–this guy Green seems to want to impress women. He’s already told me he’s involved in quilts and that he hires quilters to make patterns for him. He seems impressed with his own creativity. He’s tall, handsome, lives in a penthouse, and another thing . . . he’s obsessed with windows. Who knows, maybe that’s why he works here.” I glance at the ceiling-to-floor windows surrounding me.

“Mmm-hmmm. Interesting,” mutters Raoul. I hear him flipping through a book.

“Hmmmm. Well, nothing off the top of my head, boss,” replies Raoul, “but it certainly triggers something. What did you say the guy’s full name is? Besides Mr. Smooth, that is?”

“Very funny. It’s Garret Green, and hurry up because he’ll be back from the kitchen any moment now. He may be on to us and just be playing dumb. I don’t want to take any chances.”

“Alright, we’re good to go!” I tell Raoul. “Now quickly exit the library without anyone seeing you. Call Ruthie and tell her we’re on our way. Good work, my boy, we’ve just solved one mystery. I only hope the rest of them are this easy.”

“Can you bring me back some food from that fancy restaurant as a reward?” Raoul whispers.

“Don’t count your blessings yet. For all we know, we’re heading into a trap. Anyway, ask Ruthie to order the usual post-case pizza for us. And easy on the cheese this time. You know how Luigi piles it on.”

“Okay, over and out,” Raoul replies.

“Over and out,” I echo, and leaving ample money to cover a Heineken and fruit plate, I snap off my walky-talkie watch, pick up my bag, check for any sign of Green, and head out the back entrance. I leave without incident.

“One suspect down, ten to go,” I say, smiling to myself as I walk outside and hail a cab back to my office. ….

Stop by again next month for Episode Three, when Mitzi interviews another Trade Winds Museum Board Member, hoping to uncover the name of another quilt block in her quest to solve the Mystery of the Missing Quilt.

Now YOU help Mitzi out by drawing the Garret Windows block in EQ5 or EQ6. You’ll find step-by-step instructions in Mystery Quilt Lesson #2. 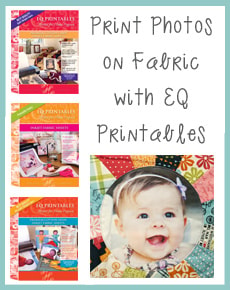