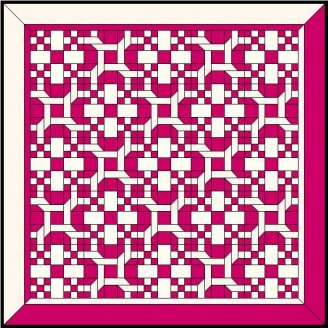 I used ‘Plaited Block Variation’ from EQ’s library and drew a companion block for it.  The companion block (named ‘Nine Patch & Cross’) was sort of like a simplified ‘Double Nine Patch’, except on an 8×8 grid.

If I were to sew this two-color version in real life (I won’t), I would simplify the plaited blocks to make them quicker to sew (no red patch sewed to a red patch, etc.) or maybe make them foundation/paper piecable.