Sea Shells by the Sea Shore By Sharon Archer 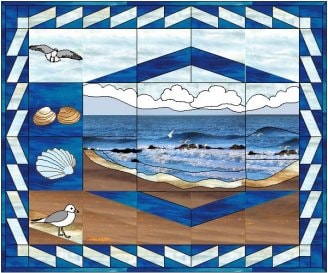 The appliquéd sections for the blocks of this design were drawn so that the fabric created from a photograph taken in December at the Jersey Shore could be fussy cut to form a scene extended across 4 blocks.
The center appliqué block was set on layer 2 and covers a 2 x 2 block area.
Another photo of the sandy beach was used as fabric in both appliqué and pieced blocks.

Seagull,shell and cloud motifs were created with PatchDraw and set on layer 2.

Previous Quilt: Courage and Hope
Next Quilt: ‘Jingle in the Sun’