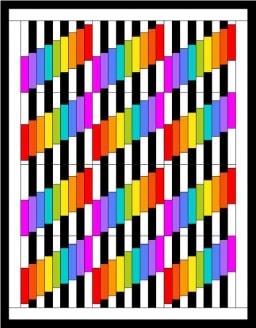 I decided to design a quilt based on the Rainbow Flag, that symbolizes diversity and gay rights.

There are also people getting killed defending gay rights, this design is to pay tribute to those people.

I used the Rainbow Steps Block from the EQ Libraries. I alternated the rainbow colors with black and white. Black and white symbolize the current controversy and polarization.

The blocks are placed in an upward movement. I do hope the rainbow steps are going up!