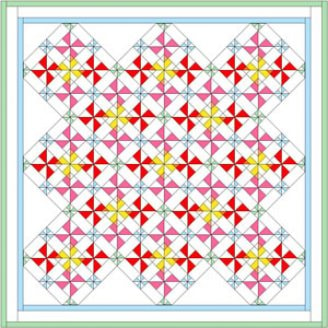 For the Half Square Triangle challenge I wanted to design traditional quilts that would look good scrappy.

Pinwheels came to mind, and I decided to draft a variation on a nine patch pinwheel block. The center pinwheel ‘overlaps’ the other four.

I set the ‘overlapping pinwheel blocks’ as 10 inch blocks on point, with 2 inch sashings and corner stones.