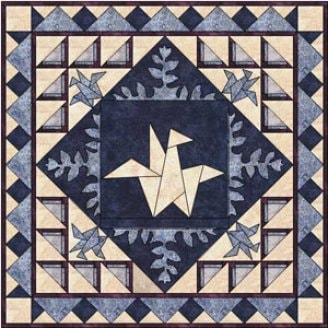 When I was a kid, my grandmother gave me an origami book that she had bought in Japan (written in Japanese, luckily there were lots of pictures). The process of folding paper to make birds and flowers and other things fascinated me. So of course, my Japanese quilt had to have some origami. I found a picture of a crane on an origami website, and imported it to trace the shape. The Hawaiian style block is Japanese Bamboo from the EQ library.

Previous Quilt: Kimonos
Next Quilt: With Respect to the Japanese People