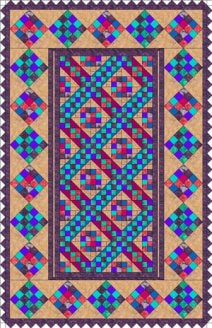 in this quilt -
I used the same two versions of Jacob’s Ladder blocks from BlockBase in this quilt — #1695b (McKim) and #1153 (Bureau Farmer). A Horizontal Layout was used for the body. In the tile on point border squares I placed 16 patch squares mirroring the squares formed where four blocks joined in the body of the quilt.