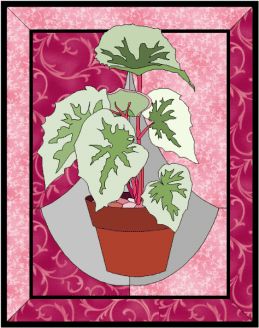 My original idea for this challenge was to show a plant with half ‘green thumb’ and half ‘black thumb’.  I had not drawn the hands yet but I had drawn half of a thriving plant with the other half sad and droopy and losing leaves.  It was an OK idea but this was the wrong season for it; maybe later.  Four days before Christmas, I scuttled that idea for now and started a new plant — all healthy, sans thumbs.

This center was designed to be 9″ x 12″ and some day it might live in fabric as a Priority Quilt.