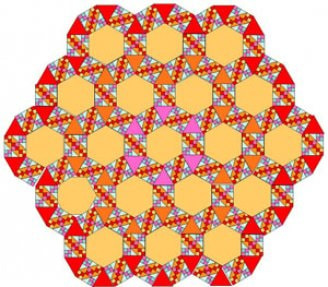 I used a Jacob’s Ladder block from the EQ Libraries (where it is named Road to California) as is, but in a non-square set, to make it something new.

The set is taken from the Jack’s Chain pattern, replacing the nine patch blocks with the Jacob’s Ladder blocks.

I started out with a one patch hexagon quilt on layer 1, to be able to see where to put the first ring of Jacob’s Ladder blocks and triangles on layer 2.
I then placed a hexagon exactly over the center hexagon patch on layer 1.
Then I copied and pasted groups of shapes already placed.

Previous Quilt: Can you see it?
Next Quilt: Jacobs Journey