Infinity, Where Will It All End? By Linda M. Remley 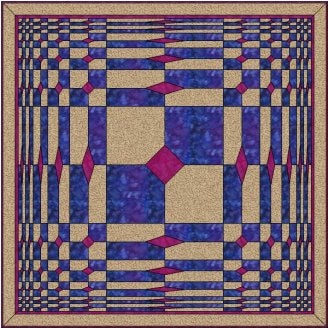 Judy Best’s and Bea Lee’s optical illusion quilts inspired me to see what would happen with the Fibonaaci series.

I created a block with the series up to eight and then put four together and played with different rotations using the bowtie pattern.  It goes off into infinity from the center in four different directions.

The title comes from my favorite Ziggy cartoon.  Ziggy is looking up at the sky and saying, “Infinity, where will it all end?”

For you mathematicians out there, since I put a border on it, it is countable infinity.