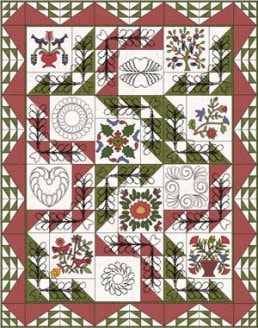 I used the same base block, Block 1391 from BlockBase, also know as “Birds in the Air”, and merged it with blocks from EQ’s Classic Applique Blocks> Folk Art> Blocks with Birds. When I was merging the applique blocks, I had to make four different versions of each applique block to rotate its position within the block so that final layout of blocks on the quilt top all had their vases, flowers and birds going in the same direction. The plain blocks were great to place the “feather” stencils.