Everybody Loves a Circus By Dianne Gronfors 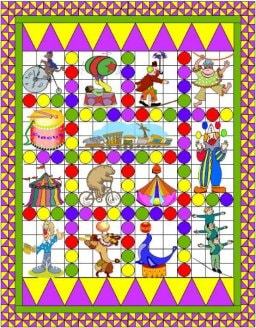 The foundation of this quilt is a series of 4″ blocks on layer 1.  I imported images to be used on layer 2 in a variety of sizes based on 4″ increments so that I could use layer 1 for positioning.  The images were reworked in Photoshop to remove the existing backgrounds and resaved as .png files to retain the transparency before importing. The circles are set on layer 1 as unit dividers.  I thought a pinwheel border was appropriate for a day at the circus.