Every bear that ever there was By Daphne Stewart 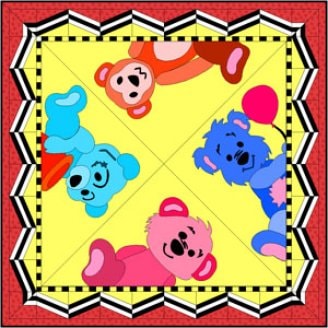 These are just blocks straight from the EQ library … tweaked a bit. I moved the applique to the left of the block and then set it into the Layout — Block Turned Quilt – 19 (Four X). I also drew a better corner block for the Triple 3-D Zig Zag auto-border (well, I think it’s better anyhow).

I used several EQ features to get my color palette. First I colored all the bears different tints or tones of a blue and saved the quilt. Then I used the shift hue feature of the Random Recolor tool several times and saved each quilt. Then I popped one block from four colorations into a quilt and gave them all black eyes and noses.

I used all solid colors except for the border red … which reads as a solid anyway.