Deck the Halls … By Daphne Stewart 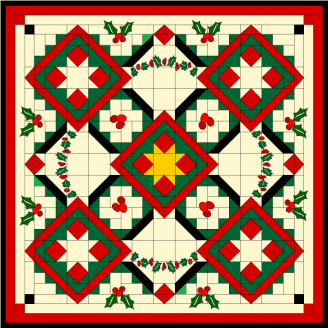 This started with an 8-grid block drawn in Patch Draw plus Motif.  I named the block ‘Castle Star’. (This block can be easily turned into a foundation-paper pieced project.)  I then drew a simplified variation of this block as an alternate and named it ‘Castle Moat’.

For the applique, I modified the ‘Holly Border’ block and ‘Holly’ motif from the EQ library.  One I added to the ‘Castle Moat’ block itself, the other I floated on Layer 2.  ‘Castle Moa’t might be modified to eliminate some of the piecing seams to make a neater base for the applique…but maybe not.