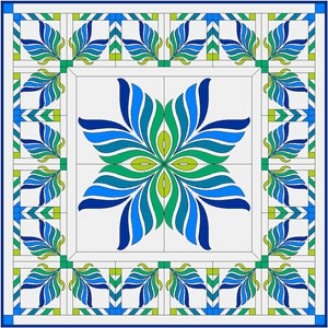 I drew a frame type block and merged it with EQ’s ‘Peacock Feathers’ block. Then I drew a little ‘end of feather’ shape inside the outer frame. These blocks were used as border blocks around the traditional ‘Peacock Feathers’ as is in the center.

I discovered that even though the background block of a merged block must be drawn in Easy Draw, once it’s merged with an applique block, it can be edited as an Easy Draw plus Patch Draw block.

Previous Quilt: House Among the Windmills
Next Quilt: Inside My Accordian