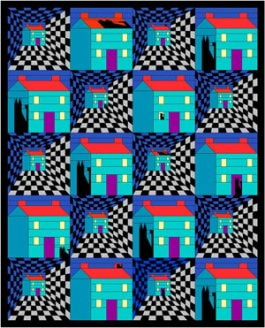 I use the Merge Blocks Tool regularly for drafting tricky blocks in parts, or changing blocks quickly without calculating different snap settings and resizing and relocating sets of lines.

So for this challenge I wanted to try some different uses for the Merge Blocks Tool.This quilt is created by using only blocks from the EQ Libraries.

I tried merging blocks more than once, and putting them in all kinds of patches of one block.
I had hoped that I could use merged blocks as background blocks, so I could merge blocks into more then patch of the background block, but apparently that is not possible.

For this quilt I also merged the Cat block into the small squares and parallellogram patches of the receiving block.

I merged some of these merged Saltbox blocks into the Perspective Grid 1 block.