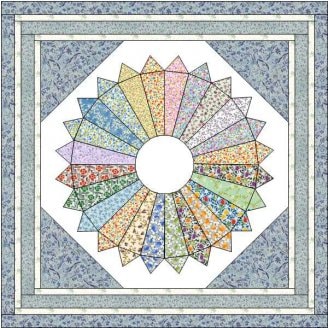 24-sectioned Dresdon Plates
“The circular pattern commonly called the Dresden Plate would seem to be an easy pattern to date if it weren’t for Anna Tuels’ mother who made that 1785 quilt.”  Barbara Brackman
“The popular name for this quilt, Dresden Plate, reflects the romance of the Victorian Era with its love of elaborate decoration on household items and décor. Dresden, Germany was a center of 19th century romanticism movement in art, one that included the fine decoration of porcelain. The plates were embellished with elaborate design using flowers, fruits and foliage. The beautiful plates would surely have been admired by women of the early 20th century.          It was first published in the 20s but not always under the name Dresden Plate. Grandmother’s Sunburst, Friendship Ring, Aster, Dahlia and Sunflower are all names I’ve seen for this pattern.”   Judy Anne Breneman